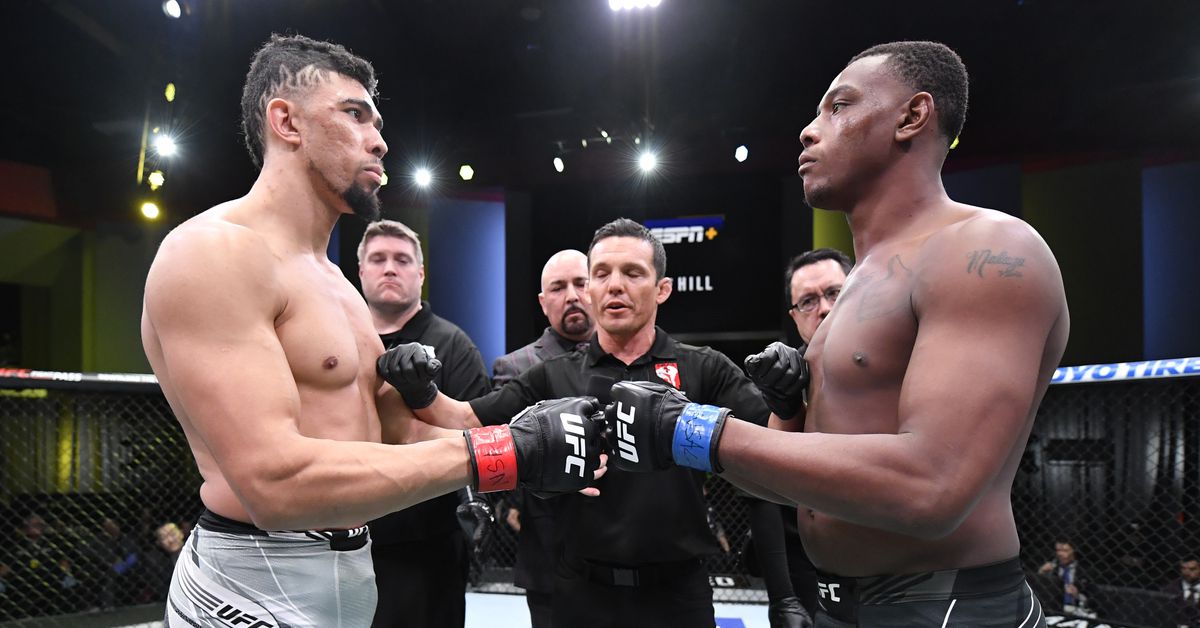 It’s been a rough few days for Johnny Walker.

Walker’s knockout loss to Jamahal Hill was his second defeat in a row, one that ejected him from the Light Heavyweight Top 10. From a health and damage perspective, it was a pretty bad knockout too, as Walker fell pretty damn hard from an overhand straight to the temple. Due to the nature of the knockout and how strangely Walker fell, there’s been lots of memes and jokes at Walker’s expense.

It’s one thing to make a joke in the comments section or photoshop a picture (this column has featured As Shopped As It Gets many times). It’s a whole different problem when “fans” are sending direct messages and harassing an athlete directly, or worse, talking trash to their family members.

I’m not typically one to get up on the soapbox, but that’s pretty shitty behavior. Walker’s fiancée described the online interactions as an “onslaught” of negativity from anonymous or fake accounts.

Hill isn’t a fan of this behavior either. “Sweet Dreams” dropped a two-minute long PSA on Instagram to his fans and the community as a whole, defending his opponent and letting his followers know he doesn’t want fans like this.

“For the entertainment of the fans and the love of the sport,” Hill began. “When I’m successful … and I have these moments that y’all like, don’t use that moment to dog somebody. I’ve lost, I’ve received the ridicule and the things that come with that. I understand that people are ignorant, but I can only imagine how y’all doing my mans right now. That shit ain’t cool!”

“He got knocked out, it happens, people been knocked out many times before. Most of you motherf—kers talking would never put yourself in [that] position, you run like a b—ch. You hide in a house. I done seen y’all before, y’all cowards! So for y’all to sit there and do this to this man who does this against the best in the world … cut it out, f—king cowards! Get out that man’s inbox!”

It’s a hopeless endeavor to prevent Internet trolling, but Hill still deserves some credit for trying.

I don’t know fully if this is a real photo of Nick Diaz, but this account isn’t one to post photoshops. Speculate in the comments.

I don’t think the women’s Bantamweight division can afford to lose Alexis Davis, there aren’t that many 135-pounders on the roster.

The Mir family legacy lives on!

Reminder: this is a Featherweight standing with a Heavyweight. Fedor is the greatest!

Respect to Armen Tsarukyan for his honesty — the man did already fight Islam Makhachev on short-notice once!

The Moose was loose on The MMA Hour today.

Amateur success is a good indicator of professional success, but it’s far from a guarantee.

’84 Olympic Heavyweight champion Henry Tillman getting his ass handed to him by Evander Holyfield.

Tillman never managed to recapture his old glory as a pro. pic.twitter.com/NjL7t8vpki

This isn’t a fight-ending clip, but it deserves to be here.

It’s hard to watch this clip and not think of Walker right now.

This is such an effortless prank.

Midnight Music: I was recommended pianist and composer Olafur Arnold’s Living Room Songs, an album which works well for anyone in search of a sad instrumental.

UFC champ got BACKSTAGE ANGRY after UFC 283 win, Islam Makhachev confirms Khabib out of UFC 284!
UFC 215: Amanda Nunes vs. Valentina Shevchenko Media Day Staredown – MMA Fighting
Boxer Liam Wilson Accuses Opponent Of Weigh-In Tampering
Leon Edwards will give Jorge Masvidal a title shot if Masvidal wins at UFC 287: ‘Let’s get in there and settle it once and for all’
UFC announces new partnership with Logan Paul, KSI