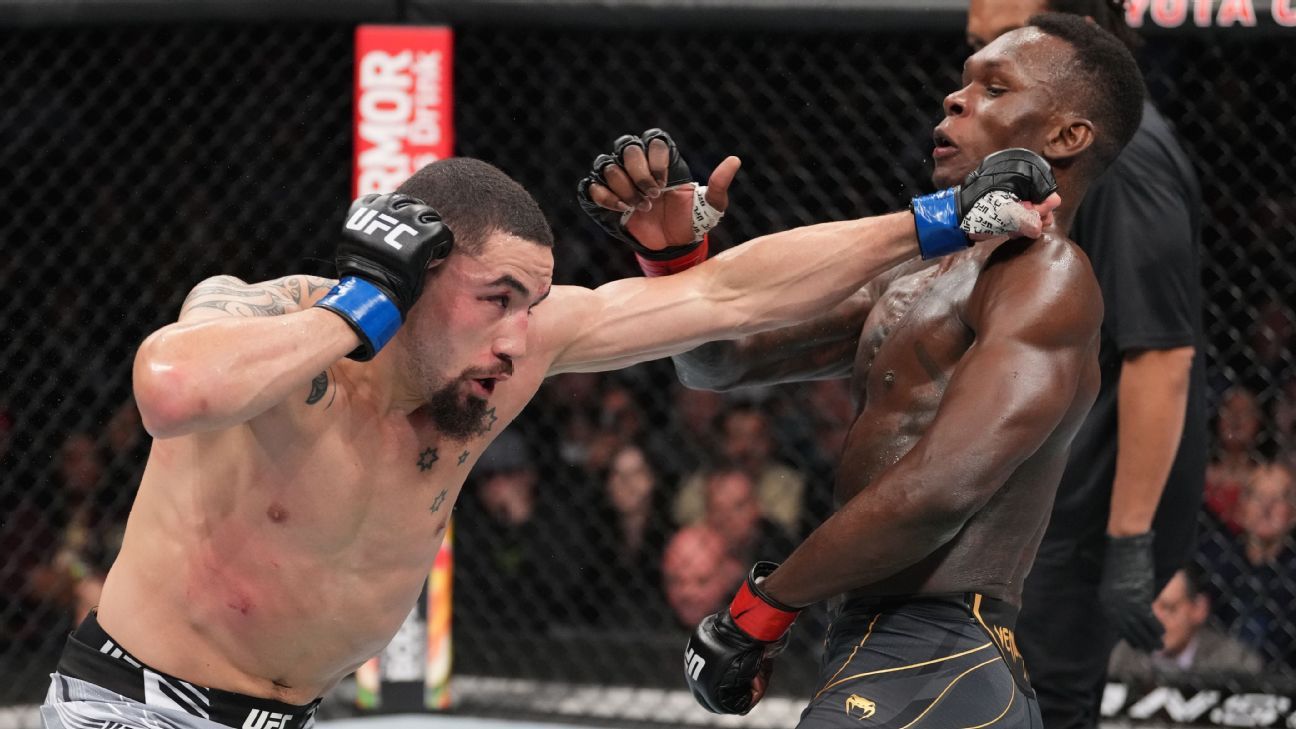 Robert Whittaker sees no ceiling on his MMA career despite the loss to Israel Adesanya at UFC 271, saying he left Houston believing he is the “best middleweight in the world.”

And the Australian hopes to be back in the Octagon as soon as possible, eager to continue the journey to get better after he pushed the middleweight champion to the closing bell in a fight he says was a “five-round” chess match.

“I’m happy with it, I’m just happy that the game plan that we enacted worked so effectively,” Whittaker told ESPN when asked to reflect on his performance in Houston.

“And yeah I didn’t get the W, but I left the fight believing I’m the best middleweight in the world. And I think that’s very valuable because looking forward to the future I just see endless opportunities.”

While Adesanya won the fight on all three judges’ scorecards, there were those — including ESPN analyst Chael Sonnen – who saw it differently, particularly given Whittaker was able to get the champion to the ground on four occasions.

Despite a slow start, Whittaker remains content with how his gameplan unfolded, although he would have liked to capitalise on those takedowns once he had Adesanya to the canvas.

“It was about mixing in the striking with the takedowns to make him uncomfortable, to prevent him from not being able to do things that he wanted to do and to not let him be free,” Whittaker said of his game plan. “And I did that to great effect.

“I was striking with him, I was out-striking him in the hands every exchange we had, the takedowns were making him wary that he couldn’t overextend for a lot of his strikes and stuff he likes doing. I believe I made him uncomfortable.

“[But] he’s just tough to hold down; he’s a tall guy and once the sweat got on everywhere it was very slippery. And it was very important that I didn’t blow my arms out forcing him on the ground because when we stand up you need your arms there to be able to block and to be able to get in and do different things. It is what it is.”

The defeat in Houston was Whittaker’s second to Adesanya, which could foreseeably create some issues when it comes to match-making in the middleweight division.

The Australian has already beaten other middleweight hopefuls in Jared Cannonier — who is expected to be given the next shot at Adesanya — Darren Till and Kelvin Gastelum, winning each fight by unanimous decision.

Asked to plot a way forward from his latest defeat by Adesanya, Whittaker said he is happy to face anyone, which would then eventually bring him back to the Nigerian-born New Zealander – no matter how long it takes.

Whittaker has also ruled out a return to welterweight.

“Yeah, that’s not happening, welterweight’s not happening,” he said. “If anything I’d go up [a division]. Whether or not I do, I don’t know; I’m a good middleweight, I’m good at what I do here. [Light heavyweight] is not out of the question, it’s just a matter of talking about it and seeing what happens.”

While his loss to Adesanya at UFC 243 in Melbourne saw Whittaker step away from the sport completely for nearly a year, the Australian could not be more upbeat about his future this time around.

“Far better headspace than before and, like I said, I left the fight with the belief that I’m the best middleweight in the world and taking that moving forward is just going to make me dangerous,” Whittaker said.

“I don’t see a ceiling on how far I can go or how good I can be. So I’m excited, I’m leaving that fight much better than when I walked in.”