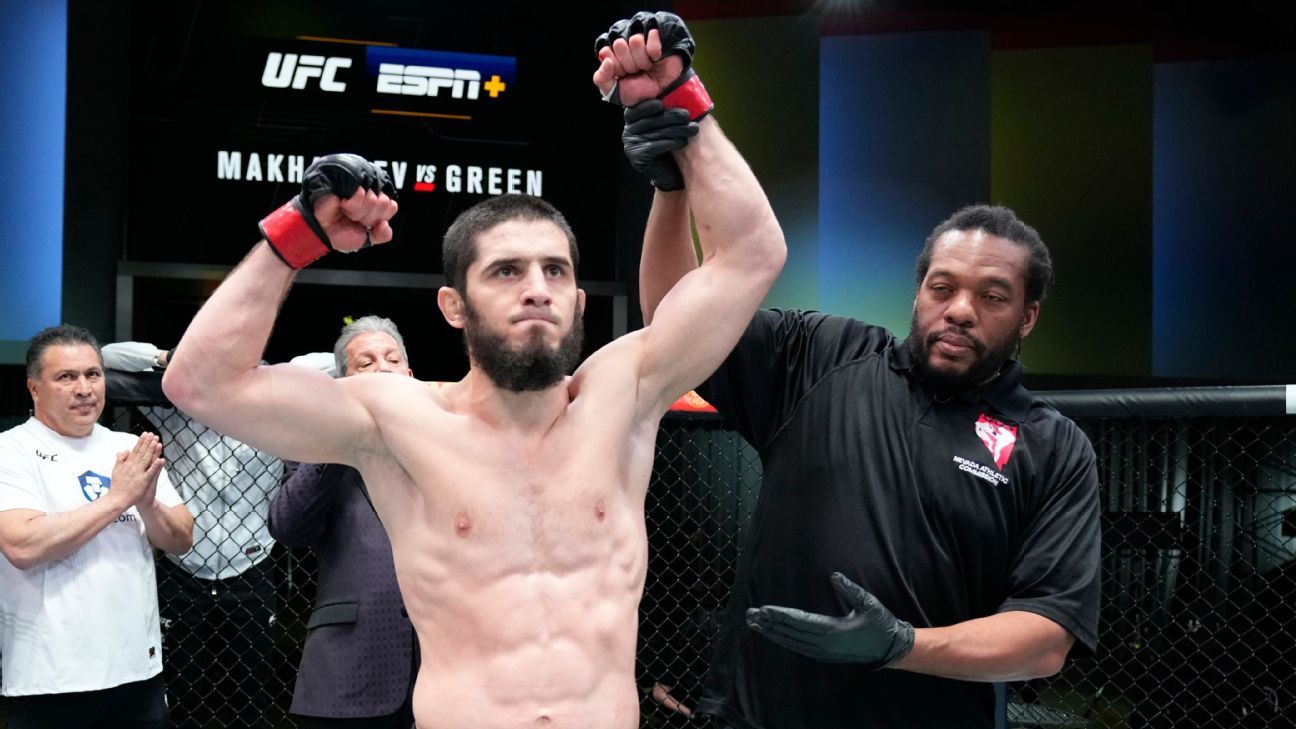 No, it was not the signature win over a fellow contender like he and his team had hoped. But Islam Makhachev made a statement that was necessary to peg himself as the next UFC lightweight title contender.

Makhachev dominated Bobby Green, finishing with a ground-and-pound TKO at 3 minutes, 23 seconds of the first round in the main event of UFC Fight Night on Saturday in Las Vegas. Makhachev got Green against the cage, shot for a double-leg takedown and then went to work. He quickly had Green’s back and landed big shots from there until referee Herb Dean stepped in to stop it.

“I just want a title fight,” Makhachev said in his postfight interview. “No more. I’m tired of all these things. I need title fight. I’m ready. I’m here.”

Green, whose previous fight was just two weeks ago, came in on 10 days’ notice after Makhachev’s original opponent, Beneil Dariush, broke his leg in training and was forced to withdraw. Makhachev had been billed as a potential lightweight title eliminator bout.

ESPN has Dariush ranked at No. 4 in the world at 155 pounds. Coming in, ESPN had Makhachev ranked No. 5 in the world at lightweight. Makhachev vs. Green took place at a catchweight of 160 pounds due to the short-notice nature of the contest.

Makhachev will have to wait a little longer for a title opportunity, if it comes to fruition. Charles Oliveira will defend the lightweight belt against Justin Gaethje at UFC 274 on May 9. Makhachev seems likely to be next for the winner of that bout.

“Just tell me when and where,” Makhachev said.

Makhachev (21-1) has won 10 straight and 11 of his past 12 in the UFC. A Dagestan native, he is a longtime training partner of former lightweight champion Khabib Nurmagomedov, who is now his coach. Makhachev, 30, was expected to take the torch from Nurmagomedov and become champ following Nurmagomedov’s retirement. That was the plan set forth by Nurmagomedov’s late father, Abdulmanap, the longtime coach of both men.

Green (29-12-1), a fan favorite, had been on something of a late-career roll, winning five of his past seven fights coming in and two straight. A California native, he defeated Nasrat Haqparast via unanimous decision at UFC 271 on Feb. 12. Green, 35, has been a pro fighter for 14 years and in the UFC since 2013.

“I’m really disappointed, but this is what happens when you try to throw things together so fast,” Green said.