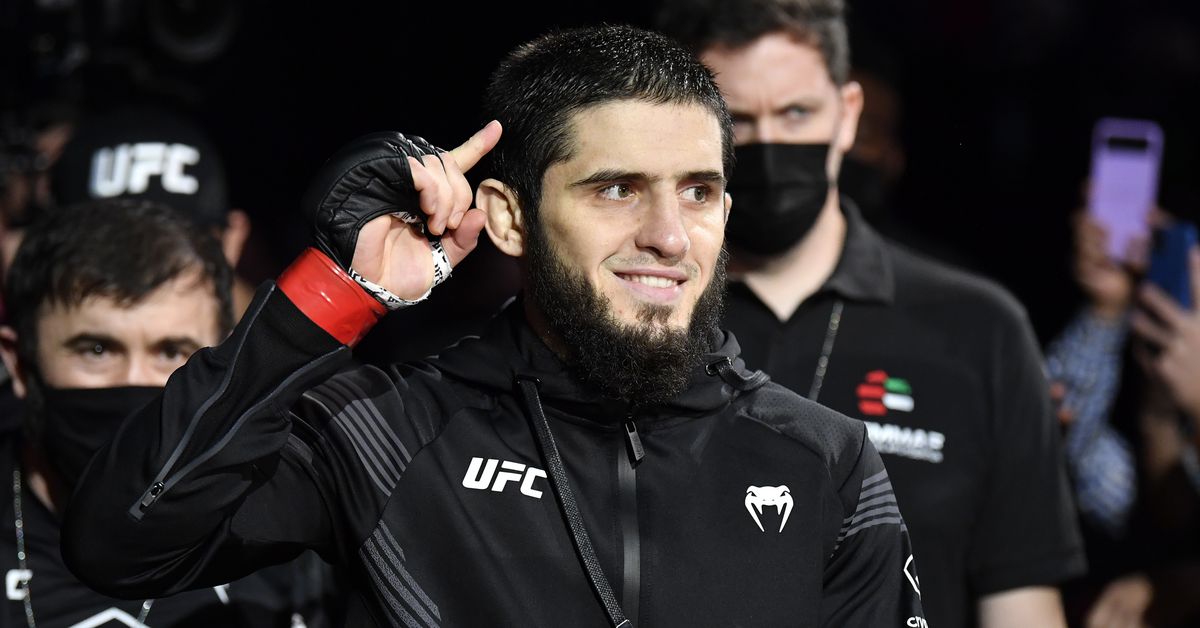 The UFC did a pretty good job of hyping up Bobby Green as a replacement fighter coming into UFC Vegas 49, giving many the hope that the trash talking, takedown stuffing gunslinger might be the guy to give surging lightweight Islam Makhachev some trouble. In the end he did not: Makhachev blew past Green’s defenses and took him down easily, mounting him and forcing a stoppage just three minutes into their fight (watch the highlights here).

At the post fight press conference Makhachev said there were no nerves with the last minute switch from Beneil Dariush to Bobby Green after Dariush broke his leg.

“This is my hardest training camp because I was preparing for Beneil and I know Beneil is a good fighter and he has good skills, so I trained so hard for this fight,” Makhachev said. “And when they changed opponent and gave me Bobby, I know for sure this guy’s not ready for this.”

“I have to respect this guy. I’m very happy that Herb Dean stopped this fight because he didn’t give me a little bit of smashing, but it’s okay. [Green] talked a little bit yesterday, I didn’t hear that he said a bad word or something like that. I don’t know. I just respect him. For me he’s a good guy. He has heart, he accept the fight on ten days. He made money, he’s happy too, I see in his face that he’s happy.”

Based on what UFC president Dana White texted to Makhachev’s coach Khabib Nurmagomedov, it sounds like Islam is next in line for a lightweight title shot against the winner of Charles Oliveira and Justin Gaethje, a fight that will go down in May. Asked if he’d be willing to jump in as a backup should something happen to the fight, Islam said no.

“For step in, we have some guys like dos Anjos or Michael Chandler,” he said. “I’m deserving. I have 10 fight win streak in the last 11 months. I’ve been training so hard. Next week I’m ready for fight. Next pay-per-view show. But I deserve a little bit of notice. I want to fight in Abu Dhabi. I have many of my friends, my family, my friends who stay outside because they cannot come to Apex. I want to fight for the title in Abu Dhabi when all my fans can support me.”

As for who he thinks will win between Oliveira and Gaethje at UFC 273?

“I think is going to be a good fight because those guys are high level,” Makhachev said. “Charles improved his striking game and he have more than Justin in the ground game. I think they going to strike a little bit, then Charles is going to take him down, take his back and finish him there. Like third round, or second round.”

You could tell that Makhachev was excited to test his skills against current champ Oliveira.

“I think it’s going to be good match,” he said. “Because this guy’s good in the striking and grappling and wrestling. I’m going to make him tired, pressure him, and make him give up. Because this guy, I know like when somebody go with him three or four rounds and give him hard punch and hard time, and he can finish some people with choke. When he do not do this, he give up all the time. But I have grappling skills more than him.”

“He going to try to finish me on the ground, but it’s going to be so hard for him.”

Of course, there’s always the specter of Conor McGregor floating around on the edges of lightweight. Especially given Makhachev’s close connection to Khabib Nurmagomedov. But Islam played it cool on the situation, laughing at the idea of McGregor jumping the line for a title shot before saying he’d happily give “The Notorious” a fight … if he can win one first.

“Honestly, I don’t remember when this guy beat someone,” Makhachev said. “He have to come back, beat someone, and then … let’s go, why not? I’m gonna smash him like easy. Bobby Green is gonna be hard for me more than him.”