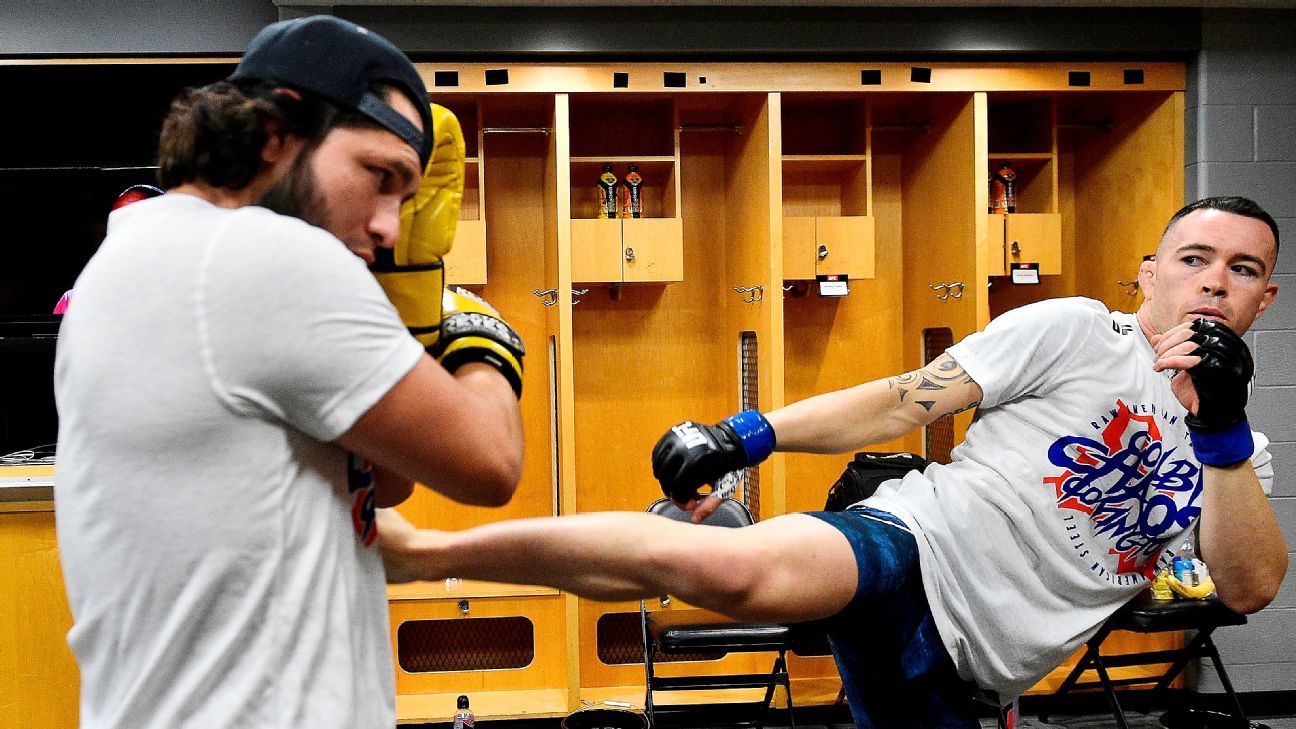 That was the only word in the Instagram post, followed by a couple of hashtags. There was also a photo of three UFC fighters in an embrace, identified in those hashtags as #FutureChampions.

“Family” was an accurate encapsulation of the rapport between the athletes who were training together at American Top Team when Jorge Masvidal posted the picture on Jan. 13, 2015. The gym in Coconut Creek, Florida, was (and still is) home to a close-knit bunch, so much so that two of the men in the picture were not merely sharing a gym. Masvidal and Colby Covington were roommates.

More than seven years later, that family has been torn apart. The three fighters on the rise are now veterans of the sport whose championship ambitions still have yet to be fulfilled, other than Covington’s brief time as interim UFC titlist. The third man in the photo, Yoel Romero, isn’t even in the big show anymore. As for Covington and Masvidal, who long ago ended their time living together, they famously fell out with each other and Covington got evicted from ATT.

Covington and Masvidal will share a space once again on Saturday night — the inside of the Octagon, as UFC 272 headliners at T-Mobile Arena in Las Vegas.

It is the grudge match to end all grudge matches, full of bitterness and betrayal, sadness and searing threats of violence.

The seeds of discontent between Covington and Masvidal were planted in the fall of 2017, when Covington traveled to Brazil to fight native son Demian Maia. Covington’s teammate, Masvidal, had fought Maia earlier in the year in a No. 1 contender fight, and the Brazilian won a split decision to earn the title shot. Then, after Maia fell short in his bid for the championship, he sought to build himself back among the contenders by taking on Covington.

In a grudge match years in the making, former friends Colby Covington and Jorge Masvidal square off in a high stakes welterweight main event.

Covington was 12-1, but he had struggled to build much traction in the welterweight division. He needed to do something to stand out, and he did so with a dominant win over Maia that night in Sao Paulo. But the man known as “Chaos” did not think his fight performance was enough. Immediately after having his hand raised, Covington took to the microphone inside the Octagon and called the Brazilian fans “filthy animals” and their homeland a “dump.” He was all smiles as he exited the cage surrounded by UFC security, showered by boos and debris.

A heel character was born.

Covington has since shown himself to be a D-grade trash-talker, stiffly delivering amateurish diatribes filled with xenophobia and race-baiting. However, his commitment to this approach raised his profile, especially after Covington’s new persona found an appreciative audience in the White House.

There was fallout, though. Brazilian fighters at ATT were refusing to train with Covington, and the vibe on the team only got worse. Tensions grew when Masvidal alleged Covington stiffed his coach, Paulino Hernandez, and reneged on a handshake agreement for payment. And when Covington turned his verbal barbs toward teammates Masvidal and Dustin Poirier in 2020, gym owner Dan Lambert decided enough was enough. He told Covington he was no longer welcome at ATT.

What a difference a few years makes.

“I get to train with the best guys in the world at American Top Team,” Covington had once said. “Jorge Masvidal, my best friend, I train with him a lot.”

“Colby and me, exchanging techniques — I’m showing him how to strike, he’s showing me how to wrestle,” Masvidal had said at the time, characterizing Covington as “my little brother.”

But that was then, and this is now.

Masvidal’s response: “If you would sell out our friendship so quick like that, we never had a friendship.”

Friends, former friends or never friends, whatever happens in Saturday’s main event won’t settle the history of Covington vs. Masvidal.

But this will not be the first time an intensely personal rivalry plays out inside the Octagon, even if it’s rare for former friends and teammates to become embroiled in so bitter a feud. As we prepare to watch the latest chapter of this most bitter rivalry between Covington and Masvidal, here are a few roughly comparable feuds — starting with the granddaddy of friends-turned-enemies acrimony.

How this feud compares to Covington vs. Masvidal: Styles make fights. Liddell was an explosive striker, just like Masvidal. Ortiz, like Covington, was a domineering wrestler. That’s more about the fight than the feud, but as it did for Liddell and Ortiz, it adds a layer of intrigue to Saturday’s expected fireworks.

How they connected: Ortiz was “The Huntington Beach Bad Boy,” and Liddell was a bad man from just up the California coast, so naturally, their paths crossed as they were young light heavyweights in the late 1990s. Both had the same manager in Dana White (whatever became of him?) and rather than becoming rivals, they trained together. Not every day, but enough to discover the ins and outs of each other’s game.

How things fell apart: It was inevitable that these two would eventually fight, and it was not likely going to be a friendly competition, considering how competitive both men were. Ortiz joined the UFC in 1997 and was champion in less than three years. Liddell made his Octagon debut in 1998 and steadily rose through the ranks until, in 2003, he lost an interim title fight against Randy Couture that would have earned him a shot at the belt worn by Ortiz.

The Liddell loss allowed the sticky situation to be avoided, but it was a temporary reprieve. Liddell and Ortiz remained on a collision course. They were no longer training together, but they were still friends, right? That depended on whose version you believed. The UFC — with White now in charge — envisioned Liddell vs. Ortiz as a lucrative fight, and the promotion finally booked it in the spring of 2004. It was a nontitle fight, as Ortiz had lost his belt months earlier to Couture, but that did not make it less attractive.

“We were friends and we had a pact: We were never going to fight.” — Ortiz, before his first meeting with Liddell

“There was never any agreement not to fight.” — Liddell

“I feel very betrayed because all of a sudden I’m getting pushed into a corner because I never wanted to fight him, because I didn’t want to do damage on my friend.” — Ortiz

How this feud compares to Covington vs. Masvidal: This is the OG of gym dramas. It’s not simply that the clash between teammates at Jackson Wink MMA in Albuquerque, New Mexico, was the first of its kind. An added element of commonality was the mentor vs. student angle, as both Evans and Masvidal were more experienced than the gym newcomers.

How they connected: When Jones arrived at Jackson Wink in the summer of 2009 as a 22-year-old in just his second year as a pro, the team already had an elite light heavyweight. Evans was only a couple of months removed from dropping his UFC championship. The title-fight loss to Lyoto Machida was Evans’ only defeat to that point during a career in which he recorded wins over several future UFC Hall of Famers (Liddell, Michael Bisping, Forrest Griffin). He was a perfect training partner to raise Jones right, and Jones pushed him every day in the gym.

How things fell apart: Evans was scheduled for an opportunity to reclaim his title in March 2011. The champ at the time was Mauricio Rua, and they were set to meet at UFC 128. But a little over a month out from the bout, Evans injured his knee in training, so the UFC slotted in a replacement challenger — Jones, who ended up knocking out “Shogun” to become the youngest champion in UFC history.

In itself, Jones’ win did not fracture the relationship between Evans and Jones. Jones saying that he would indeed fight his mentor drove an embittered wedge between them. They had previously vowed not to do so, and Evans felt betrayed. He left Jackson Wink, where he had been for almost seven years, and just a year later, he would stand across the Octagon from Jones.

“Rashad talks about the time he held me down in practice and how he was getting me to break mentally. He’s talking about a fighter that, in training in 2010, he used to beat. In 2011, I wasn’t the same fighter and I was starting to beat him. And with that same work ethic in 2012, you’re going to see I’m not that same kid he held down in practice.” — Jones, speaking to the London Free Press, on how he moved past his early struggles against Evans in the gym

Settling the feud in the cage: On April 21, 2012 (UFC 145; Watch on ESPN+), Jones def. Evans by unanimous decision to defend his UFC light heavyweight championship.

How this feud compares to Covington vs. Masvidal: More gym drama, with a coach in the middle of the drama show.

How they connected: When Garbrandt joined Team Alpha Male, Urijah Faber‘s gym in Sacramento, California, as a 1-0 bantamweight on the regional circuit in 2013, Dillashaw was already well established as the gym’s top 135-pounder. By May 2014, Dillashaw would win the UFC championship — after preparing for the fight with Garbrandt as a key training partner.

How things fell apart: Less than a year and a half into his title reign, Dillashaw was gone from Alpha Male. He had developed a tight relationship with the team’s striking coach, Duane Ludwig, but Ludwig left to start his gym in Colorado. For a while, Dillashaw split time traveling back and forth between his coach and his team. But in October 2015, he finally left Team Alpha Male, and three months after that, he was dethroned as bantamweight champ by Dominick Cruz. Within less than a year, that belt would be around the waist of Garbrandt. The former teammates’ paths were about to cross.

“I came out there [to Team Alpha Male] at 1-0. I was a kid with a dream. He was at his pinnacle of reach. He was interim champion at the time. He gave me the supreme confidence to chase this goal. I knew I was gonna be a world champion, working with this fool. So I have supreme confidence going in there Saturday night I’m gonna knock his ass out early in the fight.” — Garbrandt before his first meeting with Dillashaw