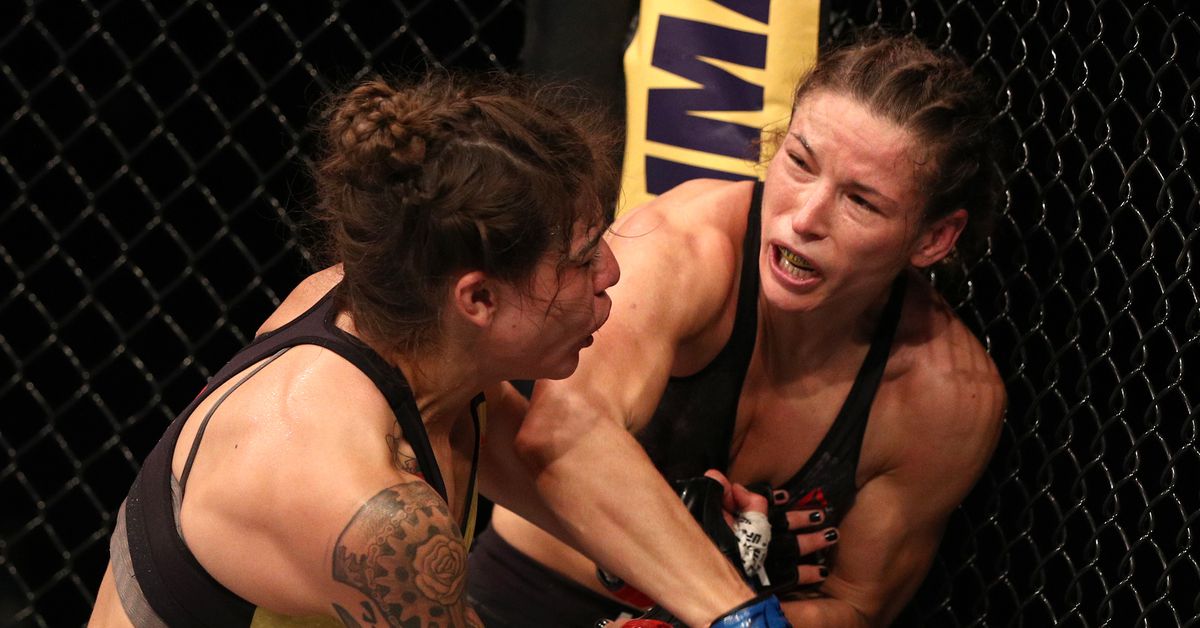 Maryna Moroz is just five days from a pivotal women’s Flyweight match up vs. Mariya Agapova, but that’s not the only thing on her mind.

Moroz is one of the few UFC athletes from Ukraine, alongside Nikita Krylov and Aleksei Oleinik. She’s the first to compete since the recent Russian invasion, which has dominated headlines around the globe. Speaking with TMZ, Moroz made her feelings on the situation very clear, sending a message to Russian President Vladimir Putin.

As for the current conditions, Moroz is concerned. Though father is making homemade explosives for the cause, “Iron Lady” wants to make it clear that her country doesn’t want war. Either way, she hopes to inspire them and rally support with her performance at UFC 272.

“It’s hard time for Ukraine,” she continued. “I want to support my country, my president, whole army in Ukraine, and I want to say we don’t want war. I worry about my family right now.”

“I will be fighting and I show that Ukraine people are strong, and my flag will be in the Octagon.”

Heading into this match up, Moroz has won her last two bouts. She could potentially earn a spot in the rankings with a victory over Agapova, who remains one of the division’s better prospects despite an ugly upset loss to Shana Dobson. Oh, and as an added layer of intrigue for the “Prelim” fight, the two are ex-training partners who hate one another.

With Rafael Fiziev forced out of his planned match up vs. Rafael dos Anjos at the last minute, names like Islam Makhachev, Paul Felder, and Renato Moicano have all jumped at the opportunity. Who would you like to see fill in?

I wonder if the course of the dragon still holds true with an immediate rematch ? ‍♂️ 174

Renato Moicano (@moicanoufc) has informed the UFC he is willing to step in against Rafael dos Anjos this weekend at #UFC272, his manager @ko_reps tells me. Moicano is fresh off a Feb. 12 win over Alexander Hernandez.

Joel Alvarez had a hole carved into his face and broke a rib — rough way to end a win streak.

Joel Alvarez tells me he suffered a broken rib on his right side during the fight against Arman Tsarukyan at #UFCVegas49.

He’s told it will be around a 2-month recovery period before he can start training again. pic.twitter.com/OHybFwxccg

Looks like I’ll get one final chance to predict a Sam Alvey loss in a future X-Factor post. I have to bump that right-wrong ratio up somehow!

Obviously, this is minor in the big picture, but the conflict in Ukraine is having far-reaching consequences.

Due to the Russian Federation’s invasion of Ukraine, KSW has made a tough, albeit ethically justifiable, decision to cancel Russian fighter Shamil Musaev’s fight, which was scheduled for KSW 68 on March 19th in Radom.

Spain without the S.

Dan Hooker is wildly thin ahead of his return to Featherweight. 4.9% body fat is no joke!

How long until this guy corners a UFC fight?

This knee is just so, so perfect.

Is the gogoplata the rarest choke in MMA? Always fun to see.

Midnight Music: I’ve been quite enamored with this particular recording of Dylan’s “Ballad of a Thin Man” for the last couple weeks. The original is already a favorite, but this live version is downright nasty.

‘Big Ticket’ Is Back, Plans Summer Return
Sean O’Malley, Aljamain Sterling, & Merab Dvalishvili Apparently Form New Fraternity
Morning Report: Michael Chandler shuts down Conor McGregor-Tony Ferguson TUF talk, makes his case for coach
Leon Edwards will give Jorge Masvidal a title shot if Masvidal wins at UFC 287: ‘Let’s get in there and settle it once and for all’
Jon Jones WARNS heavyweight and asks him to STOP WRITING HIM, Israel Adesanya reacts to critics