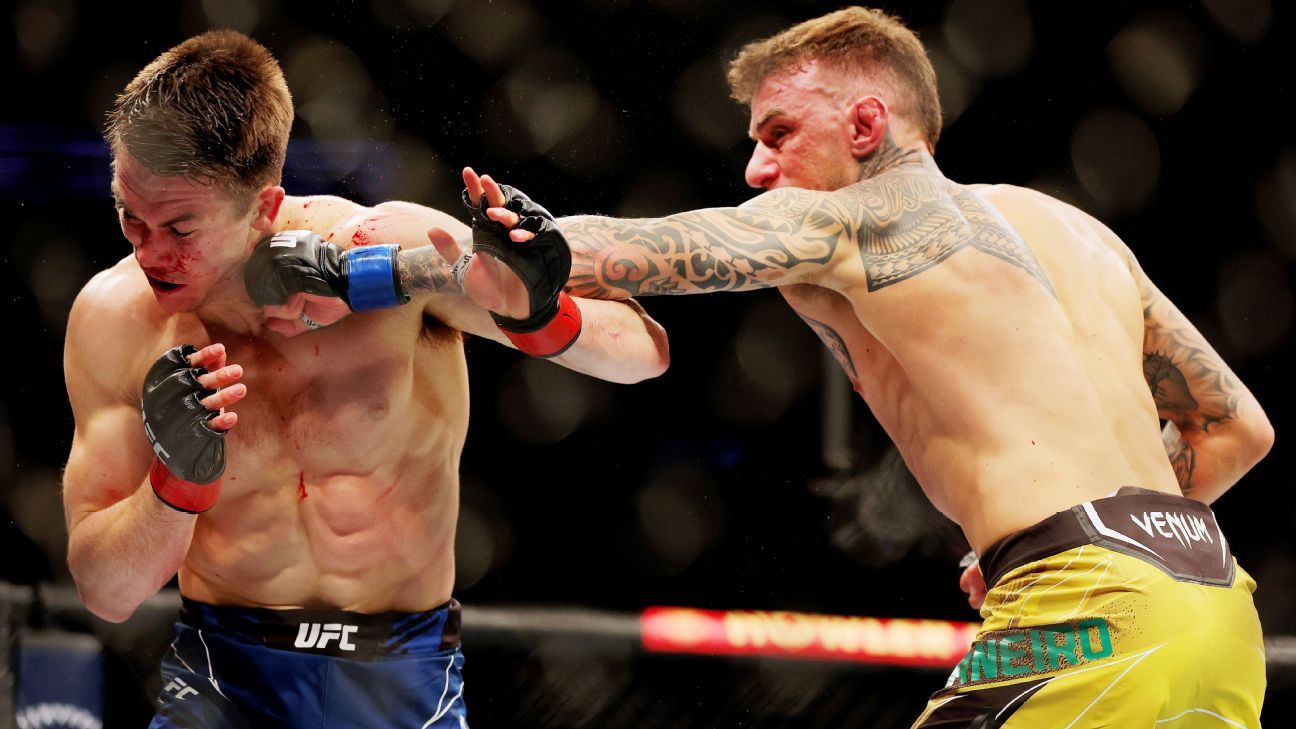 LAS VEGAS — Renato Moicano will step in on just four days’ notice to fight Rafael dos Anjos in the co-main event of UFC 272 on Saturday here, sources told ESPN on Tuesday. The fight has been verbally agreed to and both sides are awaiting contracts.

Dos Anjos, the former UFC lightweight champion, originally was scheduled to fight Rafael Fiziev this weekend, but Fiziev withdrew Monday due to being sick with COVID-19. Dos Anjos wanted to remain on the card and UFC was able to come to a deal with Moicano.

The new bout will be contested at a catchweight of 160 pounds over five rounds.

A few other names, including top lightweight contender Islam Makhachev, were in discussions to replace Fiziev but Moicano won out. Dos Anjos tweeted that he called Makhachev’s bluff and Makhachev “folded.” Makhachev beat Bobby Green in the UFC Fight Night main event just three days ago.

Moicano is in Brazil and still waiting to find out when he’ll be able to travel to Las Vegas, per his manager, Oren Hodak of KO Reps. Fighters traditionally arrive Tuesday of fight week if the card is on Saturday.

Dos Anjos (30-13) has not fought since a split-decision win over Paul Felder in November 2020. That was the Brazil-born fighter’s return to the lightweight division from welterweight. Dos Anjos, 37, was the UFC lightweight champion in 2015 and 2016 and has one of the toughest strengths of schedule in the promotion’s history.

Moicano (16-4-1) has won two straight and three of his past four, with the lone loss during that span coming to Fiziev. The 32-year-old, who trains out of American Top Team in Florida, is coming off an impressive, second-round submission win over Alexander Hernandez at UFC 271 on Feb. 12 in Houston.

Midnight Mania! Masvidal Shuts Down ‘Durinho,’ BMF Title Defense
UFC 259: Blachowicz vs Adesanya – I Know What True Greatness Is | Fight Preview
Sean O’Malley denied entry in restaurant for ‘dress code violation’
Mike Perry to act as back-up for Tommy Fury in Jake Paul fight
Leon Edwards will give Jorge Masvidal a title shot if Masvidal wins at UFC 287: ‘Let’s get in there and settle it once and for all’