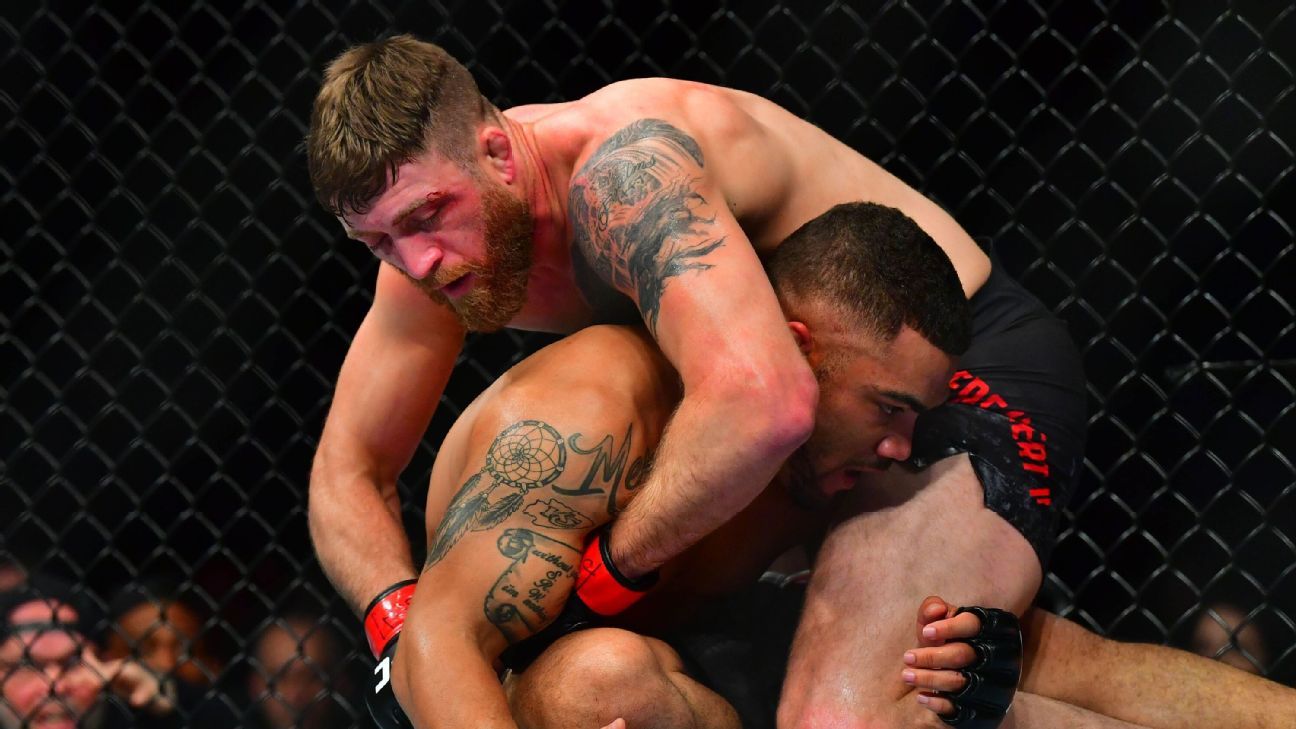 Ask any serious MMA follower to name the top five submission fighters in UFC history and you’ll have Charles Oliveira (15 submissions) and Demian Maia (11) thrown back at you before the question is fully out of your mouth. They’re No. 1 and No. 2. They’re easy to list.

After that, there will be a pause while the fan pieces together that Jim Miller — in piling up the most Octagon appearances of any fighter (39) — has ended many of those contests (10) with his opponents tapping out. He owns third place.

Fourth place might stump some folks, honestly. It’s Nate Diaz (9). We associate him with some of the sport’s most iconic submissions — the stunning choke-out of Conor McGregor in 2016, the hilariously vulgar double-bird triangle of Kurt Pellegrino in 2008.

That leaves just fifth place, where two fighters are tied. While MMA diehards might be able to produce one of the names, former heavyweight champion Frank Mir, there’s little chance they would get the other. Give even the most devoted fans all day and they’re not coming up with Gerald Meerschaert.

The middleweight from Milwaukee has had eight submissions inside the Octagon, twice as many as the next active 185-pounder in line. That’s eight subs in nine UFC victories — and Meerschaert’s other win was also a finish. A body-kick TKO of Eric Spicely in 2017 spoiled his perfect tapout record.

But Meerschaert, true to one of his nicknames (“The Machine”), always finds a way. Over his 15-year career in MMA, Meerschaert has had more submissions than can be counted. Literally.

The reliable MMA record keepers at Tapology and Sherdog list him with 26 submissions among his 34 victories. Most of the tapouts have come via rear-naked choke and guillotine choke, but his resume also shows arm triangles, armbars and triangles, plus an anaconda, a kimura and a neck crank. Apparently, that’s not the whole story.

“There are a bunch of fights that are not on my record,” Meerschaert told ESPN this week. “I have had so many pro fights, I don’t even remember them all. But I know of anywhere from six to 10 fights that are missing.”

Going into Saturday night, Meerschaert is riding a three-fight winning streak and a run during which every one of his wins since 2017 has come by rear-naked or guillotine. It begs the question, which leads to more questions about Meerschaert’s favorite topic: submissions.

His favorite submission: I don’t know that I have a fav– no, wait, yeah, I do. I like guillotining people. Honestly, it’s kind of for nostalgia because my first coaches were good at guillotines. So that’s the first choke I got comfortable with. I like guillotines because I do a lot of scrambling and integrate wrestling with my MMA jiu-jitsu. And if you’re going to scramble, you need to be good at some kind of front choke.

Why he’s hit more rear-naked chokes than any other finishing move: I like chokes in general, although when I say that, it’s not like I won’t go for some other finish, because any way I can submit someone is awesome. But the grappling situations I tend to create put me in position for the rear-naked. If you watch any of my fights, I get most of my submissions because I’ve beaten the crap out of my opponents first, sometimes on the feet but often in ground-and-pound. Getting beat up on the canvas leads the opponent to try to build to their base and get up. So I’ve been incorporating a lot of wrist control, wrestle riding and stuff like that, which helps me gain control of their back. If I can get somebody’s back, they’re toast. That’s a dominant position where I’m pretty much safe, barring a few freak exceptions. I can ride them and do damage until they expose their neck. I’m pretty opportunistic with my submissions.

Men’s bantamweight contenders Rob Font and Marlon Vera meet on Saturday to determine who will make an upward move in the UFC hierarchy.

The submission he’s still chasing: I’m not chasing anything, but wouldn’t it be cool to hit a leglock or a twister? I go for leglocks in practice, rolling at the gym, but going for it in a fight is another thing. I try to stay more positionally safe in my fights and in spots where I can attack with ground-and-pound. But if I’m on the bottom and the opportunity presents itself, yeah, I’ll go for a leg. In my last fight, I showed a bit of that when I rolled from an armbar attempt to a kneebar. But the guy did a good job of keeping his arm between me and his knee, or I would have been able to take that leglock home. (Meerschaert beat Dustin Stoltzfus by third-round rear-naked choke in December.)

The most special submission of his career: It has to be my first fight in the UFC [against Joe Gigliotti in 2016]. I came in on short notice, and that night I had to use every skill I had, from wrestling to striking to grappling. We fought everywhere. I ended up finishing him with an anaconda, and I came to find out it was, like, one of 10 in UFC history at that time. And I got a bonus that night, so it was cool.

The rear-naked choke I got on [Makhmud] Muradov was also special. I was a heavy underdog [last August]. The matchmakers were probably trying to give me to that guy to build him up. But once I got him down, I executed the move well. The step-by-step finish was something I had been teaching my guys in grappling class for a while, and I hit it perfectly.

An MMA grappler he loves to watch: Aljamain Sterling. He’s a really good wrestler, and he’s long for his division, which helps him control from the back, which is his thing. I think his ground game is a little underrated. Many people were down on him going into the [Petr] Yan rematch, but I kept saying, if he gets this guy down and gets to his back, he’s got a good chance of finishing anybody in the world. It’s great for me to watch a guy like Aljo, because he has a different body type than I have and can implement his grappling in a different way. It gives me ideas. Like, maybe I can use this move or use that position. I learn different ways of doing the same things I’m trying to do.

Another source of grappling inspiration: Any guys from the Russia-Dagestan area are fun to watch. I was always a big fan of watching Khabib [Nurmgomedov] fight, and now I enjoy watching [Islam] Makhachev. They do cool wrist control stuff and are good at mixing wrestling with jiu-jitsu, which I also try to do. Like them, I’m not trying to win a jiu-jitsu match or take you down and put you on your back. I’m just going to be on top of you, make you carry my weight and beat you up in the process. And if you give me your neck, great. If you don’t, I will grind you into the dirt.

His pursuit of UFC submission leader Charles Oliveira — or someone else: Oliveira has 15 submissions and I have eight. That’s a big gap. It’s not like I couldn’t get to 15, but by the time I did, who knows how many more he’d have? We’re about the same age [34 for Meerschaert, 32 for Oliveira], and he’s not showing any signs of slowing down. But second place is Demian Maia, with 11, and he’s no longer in the UFC. When I heard that, I thought, I can get there, that’s just three more. I think 11 is doable for me.

‘I Regret Not Being This Monster I Am Again’
UFC Vegas 68: Lewis vs Spivak Weigh-in Results
Breaking down McGregor vs. Chandler on TUF and in the Octagon
Melsik Baghdasaryan: Knocking out Josh Culibao at UFC 284 will make Australian fans cheer for me
Conor McGregor has a laugh at Michael Chandler’s prediction