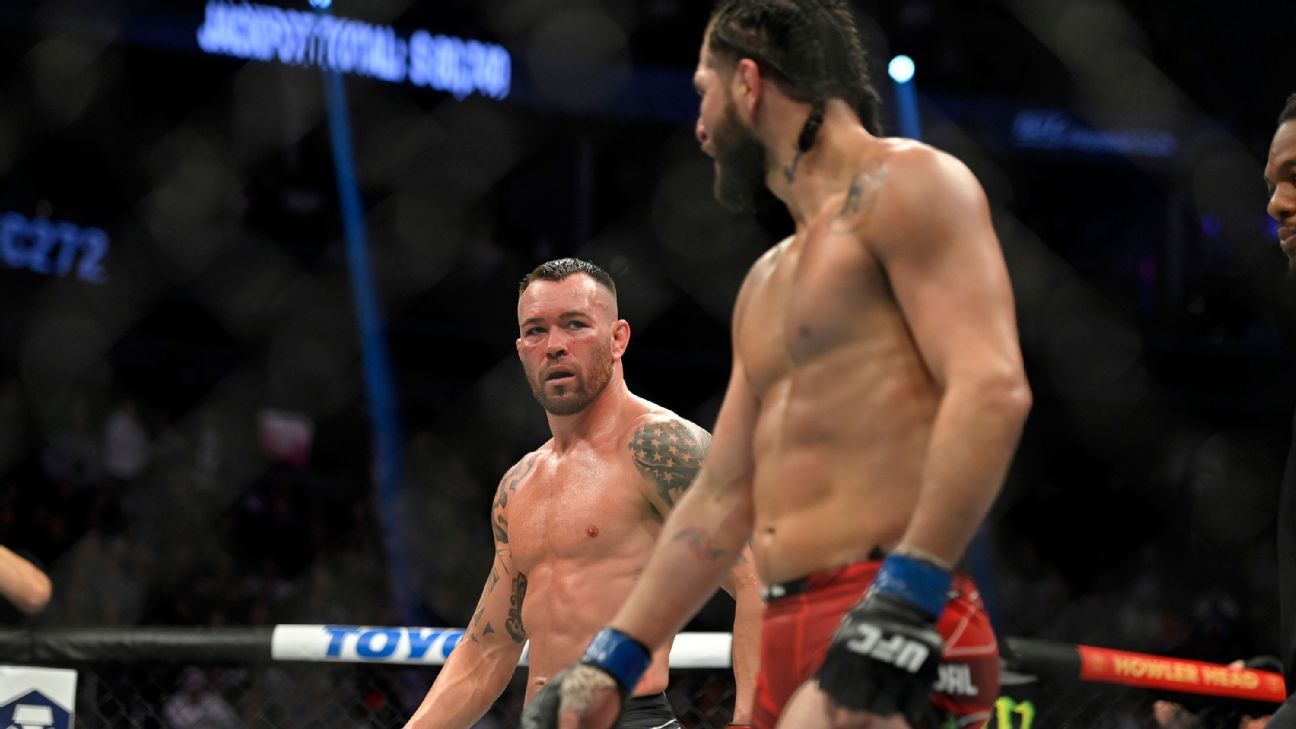 Jorge Masvidal is being accused of attacking his UFC rival Colby Covington and causing him to suffer a brain injury, according to court documents obtained by ESPN.

Masvidal, one of the UFC’s most popular fighters, pleaded not guilty to two felony charges Thursday morning in Miami. Masvidal is being accused of aggravated battery and criminal mischief, stemming from an alleged March 21 attack in Miami Beach, Florida. On Thursday, the court issued a stay-away order on Masvidal. He cannot come within 25 feet of Covington.

The count of aggravated battery contains language that Masvidal struck Covington with a deadly weapon — his hands or fists — and caused great bodily harm (a brain injury). The criminal mischief charge stipulates that Masvidal caused more than $1,000 damage to Covington’s property, in this case a watch.

Masvidal remains out of custody on conditional release. He made bail March 24 following an arrest a day earlier. Masvidal’s next court date is scheduled for May 12.

Mauricio Padilla and Brad Cohen, Masvidal’s legal team, indicated during the hearing that they will likely file a motion to inspect the damage to the watch and Covington’s medical tests.

On March 21, Masvidal allegedly punched a man twice in the face outside the Papi Steak restaurant in Miami Beach, according to an incident report obtained by ESPN via the Miami Beach Police Department. The report stated that the man suffered a broken tooth and $15,000 damage to his $90,000 Rolex watch.

Covington’s name was not initially in law enforcement documents, but it has appeared now in court documents as the victim of the alleged attack. In a tweet Masvidal wrote minutes after the alleged attack, Masvidal said in a video: “You talk that s—, you got to back it up. That’s how my city rolls, man.”

According to the incident report, Masvidal told Covington during the incident, “You shouldn’t have been talking about my kids.” That was a sticking point between the two men ahead of their UFC 272 main-event fight March 5 in Las Vegas. Masvidal took umbrage with Covington trash talking about his ex-wife, children and family.

Covington beat Masvidal via unanimous decision at UFC 272. In the postfight news conference, Masvidal made it clear that the feud between the two was not over and if he saw Covington in the Miami area — where both live — he would not hesitate to fight him.

Masvidal, 37, who grew up fighting in the streets of Miami, getting his start in pro fighting in backyard YouTube scraps alongside the likes of Kimbo Slice. He signed a lucrative new contract with the UFC prior to the Covington fight that made him one of the highest-paid fighters on the roster, his representatives said at the time. In 2019, Masvidal won the BMF belt by beating Nate Diaz at Madison Square Garden. Masvidal is a former two-time UFC welterweight title challenger.

Covington, 34, has also challenged champion Kamaru Usman twice in losing efforts. He, too, is among the most popular — and best — fighters in the UFC. Covington and Masvidal had a messy split over the past three years, over what Masvidal says was a coach who was stiffed and Covington believes was due to jealousy of his burgeoning MMA career.