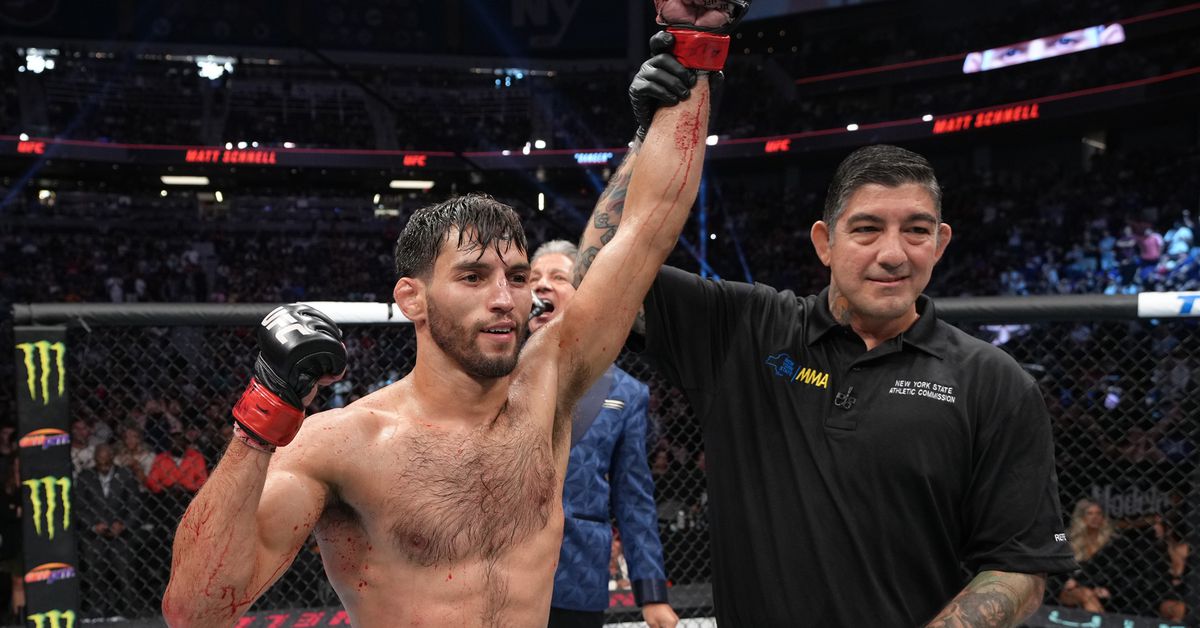 Matt Schnell was closer than anyone knew to losing his fight with Sumudaerji at UFC Long Island.

This past Saturday, Schnell submitted Sumudaerji in the second round of their “Fight of the Year” contender. Schnell was hurt several times, but he managed to weather the storm and turn the tables, putting Sumudaerji to sleep with a triangle choke. The serious shots that almost put Schnell down weren’t the only danger he faced, as Sumudaerji apparently busted his nose in the first round.

“I feel great — a little beat up, but nothing that I’ve not dealt with in the past,” Schnell explained on The MMA Hour. “This shiner that I’ve got, I actually gave myself. After the fight, I was good. It looked like I had a tough spar, I had obviously been in a fight. But later that night, I get in the shower and go to blow my nose in the shower, and I blew up my eye. So he did crush my nose. My nose is crunched up, but I didn’t realize. Luckily I didn’t blow my nose in between rounds, because I would have TKO’ed myself.”

Fortunately, Schnell did not do that and instead authored one of the greatest comebacks in UFC history in a bout that received immediate praise as an all-time great flyweight affair. The fight earned Schnell his second “Fight of the Night” in as many bouts, and also a promise from UFC President Dana White that he would “write him another” bonus check as well. Schnell said he hasn’t received any of his bonus money yet, but “Danger” does not doubt it’s coming.

“We’ll find out when the time comes,” Schnell said. “Those bonuses typically take a while to hit, and when it does, hopefully it’s more than $50,000. But Dana has always been a man of his word with regards to me, and I don’t expect anything different, so I’m sure I’ll get a little extra. So I’m happy to come out the victor, happy to come out with the bonus, and overall just very grateful.”

That extra money is a boon for Schnell, who certainly earned it. Sumudaerji stunned him several times on his feet, and at one point, live betting had him as low as a +3000 underdog, implying only a 3.2 percent chance of winning. In his post-fight interview with Daniel Cormier, he even admitted he didn’t remember some parts of the second round, and a few days removed, he said he still doesn’t remember everything that happened.

“Bits and pieces,” Schnell said when asked if he remembers getting hurt. “I’ve watched it back now, so after you’ve watched it back a couple times, it seems like you can piece it back in your memory, or that’s how it’s always seemed to me. But yeah, definitely in there I wasn’t just being funny when DC was showing me. I didn’t remember getting elbowed in that moment. That’s the God’s honest truth.”

The win stopped a two-fight skid for Schnell, who lost to Rogerio Bontorin (the bout was later overturned due to a failed drug test by Bontorin) and Brandon Royval. It keeps Schnell firmly in the top-10 of the UFC flyweight rankings. But perhaps more importantly for Schnell, he finally managed to beat a top flyweight.

“I’ve been in some scraps, and it seems like every time I get into these moments, I kind of come up short or something,” he said. “I didn’t really understand that, so it’s good to come out and be the victor. I think that typically, if I can keep my cool, if I can keep my feet underneath me — make no mistake, obviously I was wobbling around out there, but we had worked on things that I felt like came into play and that’s why I felt like I was able to stay in a decent position and continue to fight on.”

With such a dramatic win, Schnell may have earned the right to call his shot, and he’s already done so, calling for a return to New York against MMA Fighting’s No. 10-ranked flyweight Matheus Nicolau.

“I love Houston – we’d love to come back to Texas for sure, I just thought, shoot my shot,” Schnell said. “Madison Square Garden is the mecca. I’m in this not only to win fights, I want to make money, but I’m here for the experience. I’ve seen the world fighting. I’ve been everywhere doing this and it’s been a great time, but let’s get another feather in the cap. Why not Madison Square Garden?”