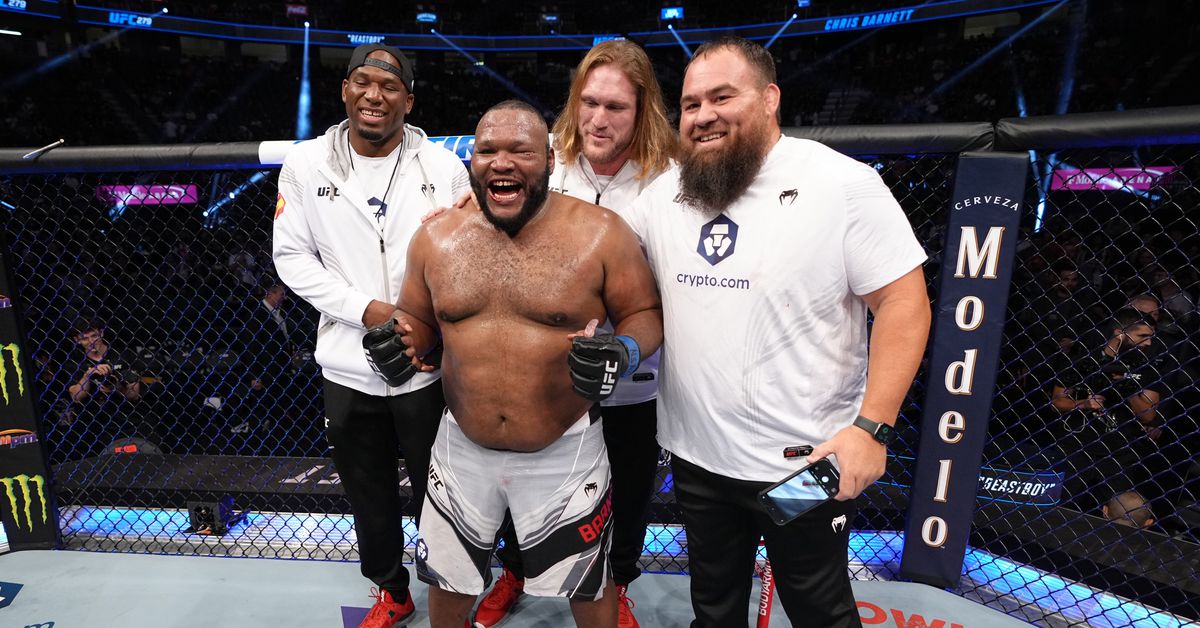 UFC 279 commentators zeroed in on the appearance of Chris Barnett’s face during his prelim fight with Jake Collier, expressing concern for what appeared to be a serious injury.

There was talk of nerve damage or a stroke. It wasn’t nearly that serious, though it certainly wasn’t fun for Barnett, who survived early trouble to make highlight reels with his trademark flip celebration.

“Jake had caught me in my [cheek], and literally a chunk of my [cheek] from the inside was just dangling in my mouth,” Barnett explained on The MMA Hour. “That’s what was going on with the left side of my face.

“I couldn’t bite it because it was like taking a butter knife and trying to cut through steak with the mouthpiece in, trying to get this chunk of my [cheek] that was dangling. I guess I bit down on one of those punches and bit a chunk there.”

The injury healed as fast as it appeared.

“I couldn’t even show you the piece – you’d be like, ‘Yeah, whatever, you had a stroke,’” Barnett joked.

For Barnett, it was just yet another hurdle to overcome in another challenging fight week. At UFC 279, he became the second-ever UFC heavyweight unable to make the 266-pound limit for a non-title fight. He took responsibility for coming in to fight week heavier than usual, but added that were it not for an overzealous doctor monitoring the fighters’ weight cuts, he would have made weight.

According to Barnett, the trouble started when he was examined by a doctor enlisted for pre-fight physicals. He said the doctor took one look at his standing heart rate and immediately sounded the alarm. When he protested that when he “ties his shoes wrong,” his heart rate soars, an argument broke out between he, his coach and the doctor.

Barnett said he was still sweating when he moved from the UFC Performance Institute, where he was finishing his cut, to the UFC APEX where the official weigh-ins were taking place. When his weight cut was halted, he had 1.5 pounds left to go, but the doc wasn’t budging.

“His favorite line was, ‘I’ve been doing this since the Gracies.’ And I was like, ‘Clearly, I can’t say anything to that.’”

And so, Barnett missed weight and was forced to give up 20 percent of his purse to Collier. But that wasn’t the only hiccup getting to the octagon. Five days before the event, he “totaled” his car in an accident.

“I said this to management, I was like, ‘You all better not say anything – I’m fine,’” Barnett said. “They’re like, ‘Are you sure?’ After what happened in the previous camp, a plane could have hit me and I was like, ‘Ah, we’re good, let’s keep it moving.’”

As Barnett revealed before UFC 279, he faced a tragic situation when his wife was hospitalized while suffering from encephalitis before his fight at UFC Vegas 51. Instead of pulling out, he continued to train and wound up suffering a technical decision loss. His wife died in May after a two-month battle with the disease.

When Barnett rallied against Collier for a second-round TKO stoppage, his joy was uncontainable. Just as he did after a highlight-reel knockout of Gian Villante at UFC 268, he flipped onto his rear end on the canvas, delighting the crowd at T-Mobile Arena in Las Vegas.

Painful as it might look, Barnett said the flip is not even close to the damage he takes in a fight.

“The cage is not concrete,” he said. “It’s not grass. It’s cushioned. I know some of those slams, you see people get knocked out from the slam – that just lets you know how strong some of these guys are taking people down. The cage isn’t that hard, and on top of that, I got a little donkey back here, man. Shoot, I’ve got a Megan Thee Stallion back here.

“I have a move called ‘spank the baby’ that I used to do at the swimming pool, where I would jump up, land on my butt, and do a flip into the pool off of my butt into the water. I’ve been getting whippings – we’re good back there. It’s cast iron.”

The same could be said about Barnett’s resilience outside the cage.