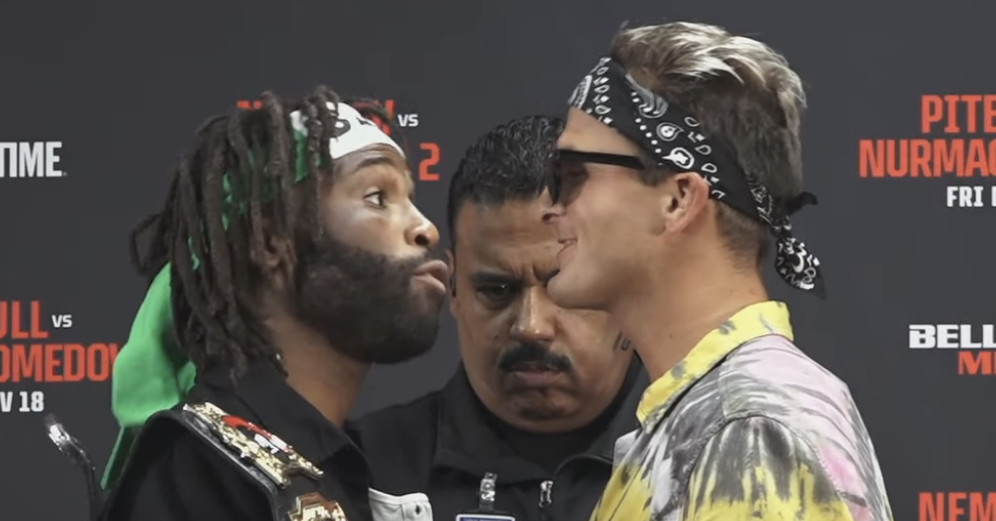 Raufeon Stots and Danny Sabatello went another round or two during a press conference promoting their interim bantamweight title bout at Bellator 289.

With Dale Brown of Detroit Urban Survival Training (D.U.S.T.) fame sitting between them, Stots and Sabatello needed little prompting for a trash-talking session that covered all the usual bases: threats, violent predictions and lots of cursing.

As Stots and Sabatello traded insults, Brown was impressively stoic. You can see the full video above, courtesy of Bellator PR’s You Tube account.

Stots defends the bantamweight title for the first time after claiming it with a knockout win over ex-featherweight champ Juan Archuleta at Bellator 279. He remains unbeaten in his Bellator career after six fights and has lost just once in 19 professional contests.

Standing opposite Stots is the verbal and wrestling threat of Sabatello, who’s barged into the title picture with three straight wins, including one over bantamweight standout Leandro Higo.

From the announcement of the matchup, Stots and Sabatello have gone for the jugular. During an appearance on The MMA Hour, host Ariel Helwani defused a near-altercation as the two compared resumes and skill sets.

The situation was more physically calm (no doubt due to Brown) backstage at Bellator 288, and after this past Friday’s fight card when the two faced off (and flipped off) each other.