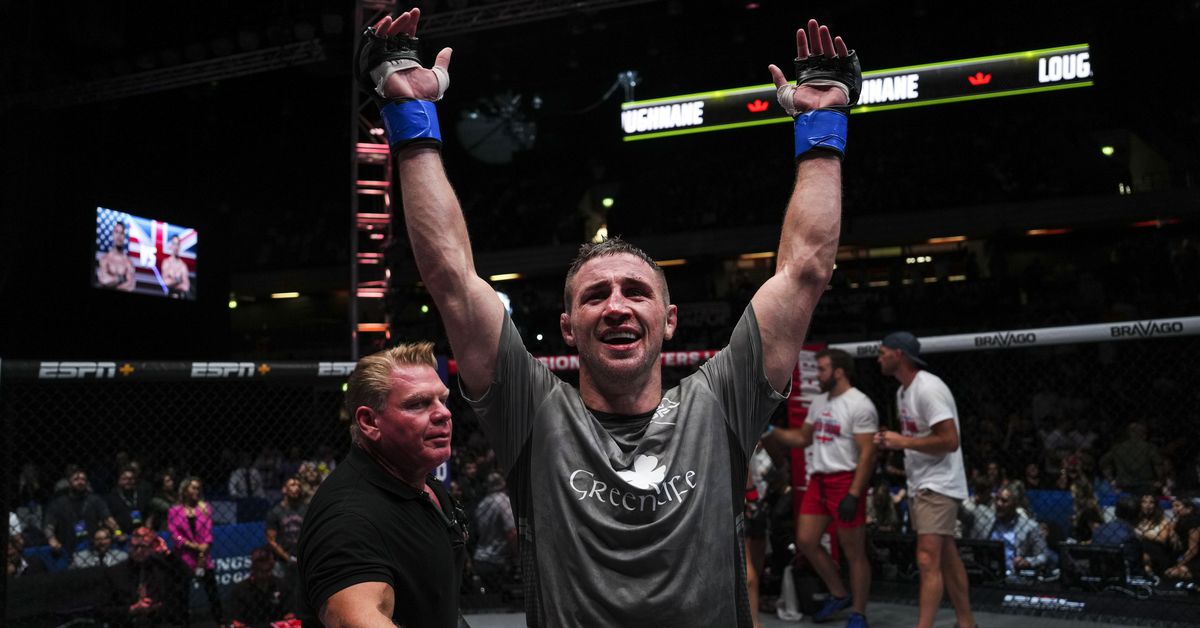 Brendan Loughnane is ready to become a millionaire.

At the PFL Championships on Friday, Loughnane faces Bubba Jenkins in the featherweight tournament finals with the title of 2022 PFL champion and $1 million on the line. With life-changing money at stake this weekend, he said he’s full prepared to cash his ticket to financial security with a win over the former NCAA champion.

“This is $1 million on the line,” Loughnane told Ariel Helwani on The MMA Hour. “This is change your family’s life type of [stuff]. People are going to fight their ass off. Chris Wade was a prime example of how I can negate and deal with wrestlers, and I think Bubba knows that. He knows he’s in for the toughest fight of his life on Friday. I know that with the skill set that I brought to Wade, and what I’ve added in the last eight weeks — I didn’t think it was even possible to raise my ceiling at this age and with this experience, but I’ve raised it again, and I can’t wait to show everyone”.

Loughnane joined the PFL in 2019 but didn’t make his first tournament run until 2021, where he lost in the semifinals to eventual 2021 winner Movlid Khaybulaev. The Manchester native turned things around this year, though, going 2-0 in the regular season and following that up with a dominant win over Chris Wade in the semifinals. He said that fight, which took place in London, prepared him for his meeting with Jenkins.

“It was extreme pressure – it was the most pressure I’ve ever felt,” Loughnane said. “We had a guy in Chris Wade — who did really well in the UFC, gave Islam [Makhachev] his toughest fight in the UFC — and he’s talking all this, he’s been a season finalist, x, y, z, and then he’s coming over and sitting as close as we are saying, ‘I’m going to hold you down and beat you up in front of 6,000 of your friends and family!’ I’m like, s***, if I don’t show up, he will actually do that. …

“The pressure, when people talk about this pressure, I just had to deal with a hell of a lot of pressure in the semis to even get here, and I pulled out the best performance of my career, or one of them. So I just feel so much more confident coming into this one.”

While Jenkins may share a similar style to Wade, nearly everything else is different. Aside from a total change in venue, Loughnane and Wade had a palpable distaste for another. That doesn’t exist between Loughnane and Jenkins; the two featherweight finalists have been in good spirits in the lead up to their million dollar fight.

While that may not exactly be a promoter’s ideal scenario, Loughnane insists the fans have nothing to worry about when the cage closes – both men will still give their absolute best.

“Bubba’s cool…I like him,” Loughnane said. “People are trying to drum up some [beef]. The guy’s cool. Don’t forget, when we did lockdown fights, we were locked in a bubble for 17 days together, and we couldn’t leave. He had his coach, I had my coach, you’d be at breakfast, dinner together, all that, and he was one of the guys that I got on with. His coach, my coach, everyone gets on.

“We knew we were going to fight, it’s inevitable, and then when we did it’s like, f***. We’re trying to hate each other in the staredowns, but we’re like, listen bro, it is what it is. You don’t have to hate somebody to fight your ass off, and that’s what we’re going to do. …

“Do you need any more motivation than $1 million? Put anyone in there, they’re going to need three of them. $1 million. That money can change your whole family’s life in one night.”

Loughnane intends to do just that. The man who once fought on the Contender Series for an entry level contract into the UFC is now on the cusp of making more money in one night than he has in his entire career, and when the cage door closes on Friday, Loughnane believes he will finally become a world champion.

“I think I stop Bubba, I really do,” Loughnane said. “I really think I stop him. I think he’s going to get tired. I keep saying it to him. I really think he’s going to get tired. That ‘three-round fighter’ thing is really hurting him. It’s really playing in his head every time I say it. He’s brought it up in every interview, so there’s got to be some truth to it. I’m a five-round fighter, I always have been. I just think it’s deep water time, and that’s what’s going to happen.”