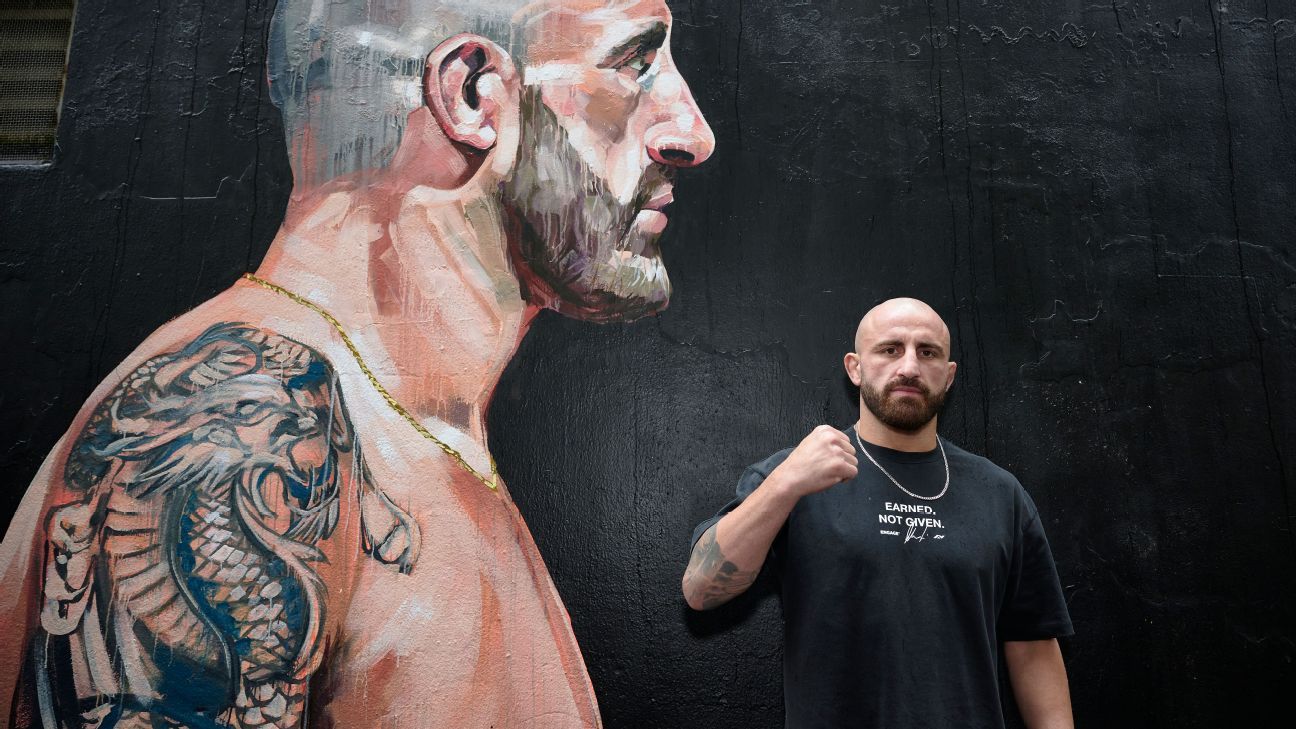 SYDNEY — Alexander Volkanovski says people have forgotten his escape acts against Brian Ortega, the Australian confident he has made the necessary adjustments to handle Islam Makhachev if their UFC 284 lightweight title fight descends into the wrestling contest many believe it will.

Makhachev, however, says that such is his depth of wrestling knowledge and skill that Volkanovski could not have improved to a level to match, detailing the Dagestani pedigree that has made a huge impression on the UFC.

The two men on Sunday set the stage for one of the most eagerly anticipated UFC fights in recent memory — a bout that pits ESPN’s No. 1 and No. 2 ranked pound-for-pound fighters against one another — when they faced off in Sydney, the meeting a brief stopover for Makhachev on his long journey to Perth.

The lightweight champion will complete the final weeks of his camp in Perth, while Volkanovski will continue his preparations at his Freestyle Fighting base two hours south of Sydney. And it is there where Volkanovski believes he has honed his wrestling and ground game to a level worthy of Makhachev, or at least create the opportunity for the Australian to sting his opponent with his striking.

“It’s definitely longer than most of my other camps, we weren’t going too crazy too early, but obviously we wanted to get all that wrestling in and building a really good base going into the eight weeks that we usually have for a camp, that’s the window, but we went a bit earlier,” Volkanovski told ESPN.

“So that’s the way we structured it, and the wrestling coaches, the jiu-jitsu guys, we brought them in pretty early, to work on certain things so when it came to that time of really getting fit and fight ready, game-planning and everything, we were in the right position. So we’ve been training hard and getting stuck into it, it’s been good.”

Volkanovski defeated both Chan-Sung Jung and Max Holloway, the latter for a third time, with some devastating striking in his two 2022 victories, setting the stage for his move up to lightweight and the pursuit of double-champion status.

While there was little wrestling required in either fight, Volkanovski believes some UFC pundits and fans, those that have written him off against Makhachev, have forgotten what he did do escape Ortega’s clutches at multiple stages of their UFC 266 featherweight title fight back in 2021.

“Everyone is saying that [this fight] ‘it’s different, it’s different,’ but I’m different,” Volkanovski told ESPN. “People are going to say this and say that, he’s a great fighter and I give him a lot of props. But I’m not just your ordinary fighter that is going to do what everyone else does, I do things differently, I prepare differently and that’s going to be the difference, people are really going to see that fight time anyway.

“So it is reasonably easy to prepare for, it’s hard work, but game-planning and all that type of stuff has been reasonably easy. But that just adds to that whole story, people forgetting that [escapes against Ortega], forgetting who I am and what I’ve accomplished, and putting him where he is, that just makes my win even bigger. That’s what I love about it.”

Makhachev completed his ascent to the lightweight championship with a Round 2 stoppage of Charles Oliveira at UFC 280, the Dagestani executing an arm-triangle choke to secure the submission victory in style.

Four of Makhachev’s last five victories have come via submission, highlighting the wrestling and grappling pedigree he has at his disposal and why he is favoured to end Volkanovski’s 22-fight unbeaten streak.

“I am a good wrestler because I am from Dagestan,” Makhachev told ESPN. “Dagestan is the best republic in the world [for wrestling], we are a small republic, but we have many Olympic champions; wrestling is our traditional sport. You can ask anybody, you can ask an Uber driver, everybody was wrestling.

“When we were kids we start to do wrestling, in the streets, wherever. But that’s why all fighters from Dagestan have good wrestling skills. You cannot prepare for a fighter who has good wrestling for a couple of months, you have to wrestle all your life.

“Wrestling, this is not kickboxing or striking – you can improve your striking in a couple of months – but for wrestling, in my opinion I think you have to wrestle your whole life.”

Makhachev said he had been training all disciplines ahead of the fight and acknowledged Volkanovski’s striking, noting the Australian’s ability to close the distance despite not having long reach.

Volkanovski, meanwhile, said he hoped to enter the Octagon around 76kgs [167.5lbs] in what is his first UFC fight at lightweight, stressing the need to not let any extra bulk negate the speed and footwork that had been critical to his rise to the top of the pound-for-pound rankings.

“We had to obviously bulk up, and that’s what we did earlier in the camp; obviously there was a lot of wrestling and all that type of stuff,” Volkanovski said. “Now it’s about bringing it to the right weight; I feel significantly stronger and that is something that we’ve all noticed.

“But one thing we don’t want to forget is that speed advantage that I have, that movement, that type of stuff. I need to make sure I find the right balance of that strength, the power, but also that sharpness, that movement, and that’s where it all starts to happen across these final four or five weeks. But it’s good, it’s going to all come together at the right time.”